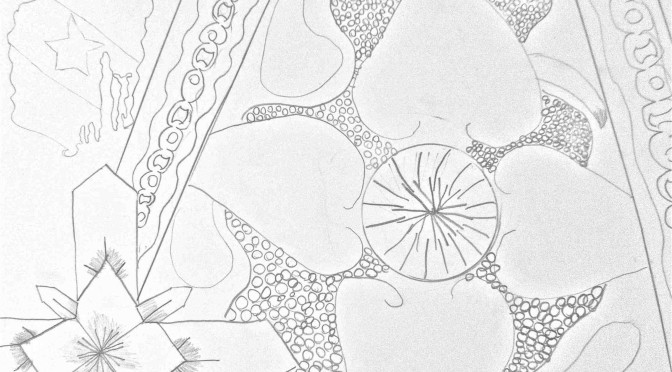 My little host sister Aicha loves to draw.
She doodles, she sketches, and, above all, she really love nail polish.

This is a problem because nail polish not approved of by the Koran. At least according to her Koran teacher. 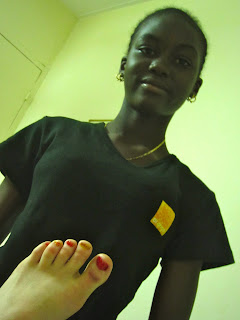 The day after my 12-year-old sister Aicha asked to paint her nails with me, her Koran teacher informed her that nail polish is bad– especially on the toes. Apparently it is expressly forbidden on the toes and not as bad (though certainly not approved of either) on the hands. So that night, Aicha went in the shower and scrubbed the brand new polish off her toes with a rough sponge. 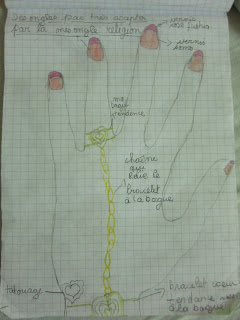 Later, I found two pictures she drew of decorated hands (with nail polish).
The top of the first one says (in French):

“Nails not well accepted by the Muslim religion”

and the top of the second one says:

“Even if certain people don’t like it, I love it!”

The best solution to being able to decorate her body without getting into trouble is to use henna.

Henna is a natural plant, with color varying between yellow-orange-dark orange (practically black). There aren’t any other color choices, and the color is dependent on the quality of the henna, the best henna dying the darkest. 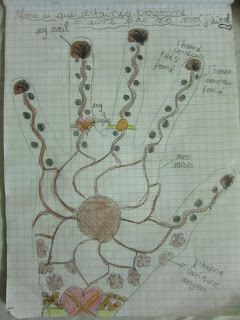 Aicha told me (though no other sources confirm this and my Professor for the History of Islam claimed it was outright incorrect) that if you die with henna on your hands then you will go straight to heaven.
“Which is why older women like my grandmother tend to do henna a lot…they know they might die soon.”

When I asked Aicha why she didn’t do henna more often, she told me that young people don’t really like it because it’s not a very pretty color. She would probably do it more often if the henna was pink! But the only way to get pink is to use nail polish, and, of course, she can’t do that.

Aicha also likes to design clothing – both on paper and with fabrics scraps that she sews together for Maymona, a once stuffed dog now converted into … well I guess she’s a BIT more humanlike?

Maymona, by the way, is in love with Mahmoud. Mahmoud is my miniature stuffed black cat, about the size of a beanie baby. So last time the two of them got together, they made traditional Senegalese outfits. 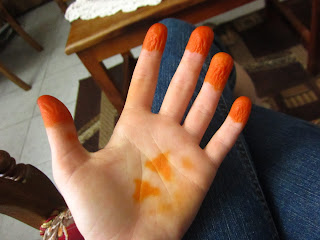 But something else was worrying me about Aicha: she always draws on lined paper.

As the daughter of two artists, I think it’s important for kids to draw and be encouraged to express themselves through art. To do so, it’s important to have the right materials. Lined paper and an everyday yellow pencil #2 doesn’t cut it. So I decided to fix the problem. I went to the bookstore, bought a pad of big, white drawing paper, and a couple of graded hardness pencils, gave them to her and, to make it less of a gift (we were told that our host families would frown upon gifts if we didn’t approve them with our host mothers first), I asked her to make an image for my blog. This is what she drew:

Conclusion: a great image for my blog, and a happy little sister!