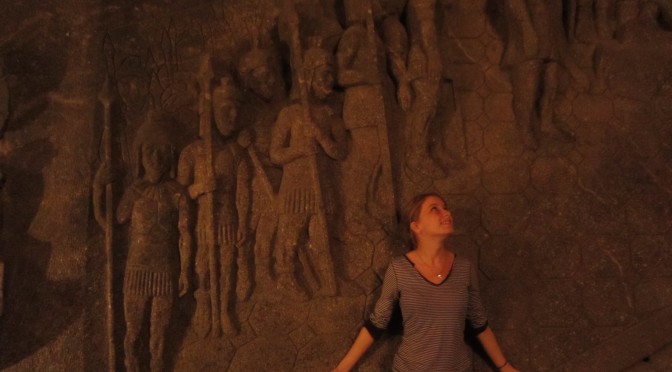 One of the best things about working with international people is all the things you can learn from them!

The featured image for this post was taken inside the Wieliczka salt mine in Poland when I visited in 2011. I didn’t get to stay long in the country, but I recall that the food was incredible!

I first came into contact with the CEFR language levels during a semester in Orléans, France. I was presented with a French placement exam to figure out my level.

The CEFR (Common European Framework for Languages) tests are produced in multiple countries. They are often referred to with different acronyms according to the language in question.

What do these levels mean?

People who take language learning seriously use these levels are used to judge a person’s language skills. I can’t say how many times I’ve met someone who tells me they are “fluent” in Spanish, but the second I ask them a simple question (“¡Muy bien! ¿Como estas?), they either refuse to respond or use grammar that is heavily flawed.

The fact is, it’s not as though you are either fluent or not fluent.

There are many levels in between. In fact, many people believe that nobody is ever really “fluent” in any language, as you can never know 100% of grammar rules and vocabulary– languages are just too complex.

Nevertheless, CEFR provides a way for people to identify themselves with levels that attempt to define language competence.

What can be done at each level?

CEFR has it’s own definitions on what each level means which are very thorough and very diplomatic. In my experience, and in the fewest words possible, here’s what they mean:

A1 Level – This is when you only know a few words and phrases. You can deal with some necessities, but you can’t really have a conversation.

A2 Level – You can have a rather simple conversation, but without a dictionary it will be uninteresting.

B1 Level – You can have real (though perhaps slow) conversation. It may take time, but you can express most things.

B2 Level – You can talk about almost anything. This is the level where you could start to legitimately claim “fluency.”

At the B2 level, you might still speak a bit slowly and need a dictionary on occasion. Usually, though, you can start to take college classes and work a job in the language with this level.

C1 Level – Not only can you talk about everything, but you also have  a good grasp of grammar. You might still sound a bit foreign, but hey… nobody’s perfect! Or are they?

C2 Level – As far as I know, nobody takes this test unless they plan to do translation (or something similar) in the language. This is above and beyond what most people ever need. It shows that not only can you speak the language, but you’ve really studied it.

[Cover photo: Paris and the Eiffel Tower as seen from the Arc de Triomphe.]